If you were to pick a quote that described me well, here it is …

Ability is what you are capable of doing. Motivation determines what you do. Attitude determines how well you do it.
–  Lou Holtz

Originally from South Berwick, Maine, I grew up with four brothers, which explains my penchant for climbing trees and catching frogs. 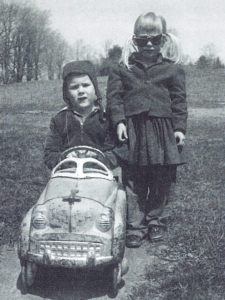 Influenced by the Great Depression of their youth, my parents steeped me in rugged Yankee ingenuity, frugality, independence, and practicality. “Use it up, wear it out, make it do, or do without.” This Yankeeism has become second nature in everything I do, sometimes to a fault, at which time my husband reminds me to come up for air.

A handful of dirt-poor nuns ran my elementary school, most managing two grades simultaneously (sixty students) in a single classroom. Despite inadequate resources, they provided a remarkably enduring education. A recent course of study confirmed the accuracy of my memory of what they taught me fifty years ago.

When my family moved to New Hampshire, I entered (public) junior high school and promptly became an abysmal student. Somehow I survived both culture shock and hormone shock and thrived in high school, excelling in math and English. I still visit my sophomore English teacher, whose daughter is a renowned novelist.

Next was enrollment at the brand-new College of the Atlantic in Bar Harbor, Maine, a risky venture for founders, instructors, and students alike, when colleges across the country were folding up like card tables. But COA, recently rated the top “green” college in the country, has proved the wisdom of its founders. I graduated in the first large class (12) and worked in my field of study (land use planning) for six years.

When the economy shriveled, I apprenticed at Bath Iron Works, pipefitting the US Navy’s guided-missile frigates and Aegis cruisers. I got laid off again, but walked away with a 1st class journeyman’s license.

That’s when I took up drafting, which has kept bread on the table ever since. Various positions have provided experience in civil engineering, surveying, electric, telecommunications, biopharmaceuticals, and landscape architecture.

I’ve written since I could hold a pencil. As a child, I ruthlessly plagiarized my favorite horse stories. (Since then, my work has improved in quality and originality.)

Bead of Sand, my debut novel, came out in 2013, a modern-day story about a Civil War reenactor and a museum employee. Then I turned to an earlier manuscript, sorted out its fuzzy premise, and finally turned out The Sturgeon’s Dance (2018). In this emotionally turbulent tale, two characters psychically linked since birth never meet until they are in their thirties, when one is hired as a consultant in the other’s office.

Groundwork is underway for a non-fiction work about police families surviving line-of-duty deaths – Beyond End of Watch.

Other writing, some of it published, includes poems, ballads, short stories, profiles, magazine articles, blog posts, an illustrated children’s book, and a hiking guide. Someday I will renew research for an historical novel about cadet life in the US Naval Academy during the Civil War.

My professional and scholarly writing portfolio is packed with reports, essays, tour guide scripts, and research articles. Editing credits under my belt include four novels, a book of poetry,  newsletters, and magazine articles. I’ve developed and designed copy for websites and for marketing materials, including advertisements and brochures.

I’ve drawn since I could hold a pencil, too. Although horses dominated my work, any animal was fair game. I wrote a children’s book (as yet unpublished) about kiwi birds and illustrated it with 4-color hand-cut block prints. And once upon a time, I illustrated a cookbook by an Alaskan Malamute club in Maine,  with dogs wearing chef’s hats, mixing batter, and juggling eggs (badly).

My concept of visual arts expanded to include maps, which led into professional drafting, first by hand and then by computer. Hand drafting prompted my living history portrayal of a Civil War topographical engineer. A map I produced for a friend’s novel about WWII aviation was published in his book in 2010.

Various jobs have furthered my experience in graphic design and development, including short stints at advertising copy layout. I can’t count how many trade-show posters, mailers, and flyers I’ve designed. Although I’ve created two websites, I have little affinity for electronics, so I leave the internal digital workings to those with the passion for it. I’m happy to work on the content.

CAD (computer-aided drafting) work has been my primary occupational mainstay for over twenty years. Positions at various firms have broadened my experience in civil engineering, surveying, electric, telecommunications, biopharmaceuticals, and landscape architecture.

I’ve designed four book covers, two for my own novels and the other two for fellow writers.

At the advent of the Bicentennial, I discovered that history didn’t have to be dusty and dry. Who knew? As a reenactor, I got to play dress-up, camp in exotic locations (including an Air Force hangar), and wear out my shoes and lungs playing the fife in every parade on the East Coast.

Mapmaking expanded to include military engineering—surveying and field measurements, bridging, fortifications, and defensive structures. My solo performance as a Civil War military engineer illustrates the works of this little-known branch of the army, engaging audiences in hands-on activities. Great fun!

Do two months of piano lessons in fifth grade count as formal musical training? (Don’t answer that!) A lifelong love of folk music launched my fife and drum career when I was in college. As a fifer, I joined McCobb’s Company of Militia, my first reenactment group, at the dawn of the Bicentennial, keeping our soldiers in step with our single drummer.

This led to tracing the origins of period tunes, much easier now in this digital age. Today online, we can read a scan of a hand-written music book from 1679 housed in a London museum, with its original ink blotches and wine stains (or is that blood?).

Besides solo performances of fife and/or drum and bowed psaltery, I play with two fife and drum corps that represent the citizen-soldier musicians of the American Revolution, and with a Civil War-era string band that performs the music sung around the campfires of Civil War armies, North and South. Besides singing harmonies, I play gourd, spoons, and whistle.

Other Vocations and Avocations

All this has been seasoned with intermittent, broadly differing stints, both paid and unpaid. I’ve been a licensed tour guide in Washington, DC, a backyard auto mechanic, a manager of a small horse farm, a bookkeeper, an advertising copy layout artist, a board member of various non-profit groups, a camp counselor, and a tutor in reading and geometry.

All these weave together to the degree that it’s hard to tell warp from woof.

Thoroughly immersed in living history, I wasn’t surprised to meet my husband Phillip, a Massachusetts native, on the battlefield (talk about common interest …). We married in 1985.

His life-long fascination with Abraham Lincoln fostered our switch a few years later to Civil War reenacting, and he soon developed a first-person portrayal of our 16th president. Under the business name Lincoln For The Ages, he has performed professionally at hundreds of events from Virginia to Maine, from the Cub Scouts to the White House.

In my “free” time, I like to cook, knit, sew, read (especially about scientific discovery), draw, volunteer at my church, dig clams, sail, row, ride horseback … (Do I have to stop here?)

We’ve lived in Massachusetts and Maine, with a six-year sojourn in Virginia before returning to Phillip’s home state. His siblings (he’s one of seven) all live within an hour’s drive, as do mine except for one brother near Philadelphia.