Two weeks ago, I closed a certain social media account because of the platform’s inability to articulate their problem with my posts. They say they encourage businesses to learn from each other and collaborate. (Sounds good!) They say they do not allow hard-sell, spammy, or self-promotional posts. (Sounds good!) But they have trouble identifying those.

For months, I posted “Weekly Wordsmith Wisdom” to this platform. Lately they denied two of them, and a third one (most recent) they edited to suit their standards.

Before the third post, I asked them for specifics about the two denied posts. They replied that my posts were self-promotional and needed moderating to ensure trust, safety, and quality. Again, I asked for specifics, because I couldn’t see any hard-sell, spam, or self-promotion in them. How was I damaging trust, threatening safety, or providing poor quality? What was I missing?

After two weeks, an email arrived stating that since I hadn’t responded to an email from one of their agents, they were closing the case. I never received that email, so again I asked for specifics: What exactly was wrong with the posts? 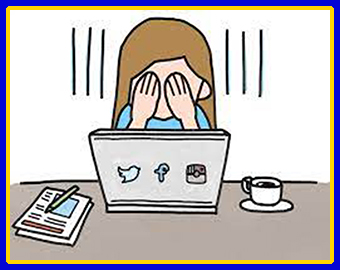 The agent replied that I should post my self-promotional material on my profile to add value to my community groups – namely groups of authors and musicians (this was the only specific in the whole email thread) – which in turn could interest businesses in those groups to check my profile for more about my products and services. I was also advised to consider carefully who I am trying to reach with my posts, to use the “lens of a fellow small business owner” to generate business engagement.

OK, that sounded good, too, but generalizations about profile enhancement still didn’t answer my question. I reviewed the platform’s standards of conduct and podcasts about how not to hard-sell. Still, no clue as to my transgressions.

Subsequent emails pointed out that my posts were 1) repetitive, 2) irrelevant to small businesses, 3) weren’t industry-specific, and 4) again, that I should be talking only to my so-called community groups – other writers and musicians. Again, no specifics provided.

1) What repetition? Each post was different, as I provided different aspects of writing and editing from different professionals in different books.

3) Writers and editors are not necessarily industry-specific. Most have developed specialty work in a few industries, but most are capable of work in more than one field. And what is a writer’s or editor’s industry? Writing and editing, which every industry needs.

4) How can I reach out to small businesses interested in my services if I’m only allowed to communicate with other writers? Isn’t that preaching to the choir? They don’t need tips and tricks about English usage – they already know them. They aren’t my prospective clients.

My “Weekly Wordsmith Wisdom” posts are intended to provide useful information for non-writer/non-editor businesses to improve their own written work if they choose to apply my tips. If they hire me to help them prepare content, the material will be easier to work with (and more economical). If they don’t hire me, the material will communicate their message better. It’s a win-win. It’s not always all about money.

When I checked on the single post (of the three contested ones) that they edited, I found that all they did was remove the link to my website and my newsletter sign-up “call to action.” Apparently, things that are verboten on their site are too verboten to mention.

This social media platform obviously needs services like mine because of their inability to communicate. All they had to say was not to include my website or newsletter sign-up. Instead, they dragged my post content into question, irrelevant to the issue. Giving me a direct answer to a direct question, instead of traipsing all around Robin Hood’s barn, would have saved both of us a lot of aggravation. They escalated a simple task into a tangled mess. It was unnecessary and unprofessional.

I have no problem with social media sites having codes of conduct and various rules and regulations – they’re necessary- but when they tell me I’m breaking their rules but can’t tell me how, I’m not obligated to remain associated with them. So, I’ve left. There are better fish to fry out there, and I’m going after ’em.

Nicknames stick to people,
and the most ridiculous are the most adhesive. 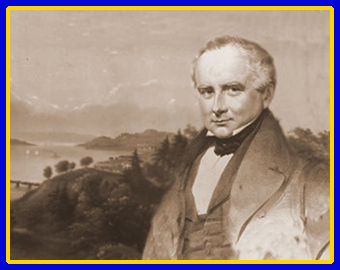 Names and nicknames have generated some noodling in my beady little brain lately. They are important to us as individuals and as communities, for they give us identity, not only to distinguish ourselves from others but also to show membership in families, tribes, and clans.

The first time I read about when God presented Himself to Moses, who spied the burning bush, I didn’t get the meaning of His name, “I am that I AM.” Now, that’s a weird name! All these decades later, my understanding of it still remains wobbly, but it’s clear that when we humans refer to ourselves as “I am (this)” or “I am (that),” we acknowledge an authority and identity about ourselves that no one else can claim. In a sense, each of us is our own “I AM.” 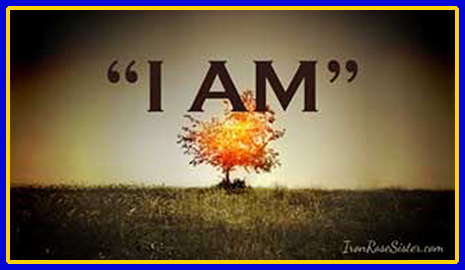 In the film “The Shack” (based on the book of the same name by William P. Young), a man goes up into the mountains in winter to find solace from his overwhelming grief over the murder of his little girl. He comes across a shack where three individuals live – a sturdy black woman, a lean white man, and a willowy young Asian woman. It turns out that these three are the Holy Trinity. When the man realizes who he’s with, he timidly tries to ask the black woman if she’s “God the Father.” “Are you—” he stumbles, “you are—?” “Yes,” she replies with a smile, “I am that I AM.”

Even Popeye displays his own self-esteem, albeit supplemented by downing a can of spinach – he knows exactly who he is when he says, “I yam what I yam, and that’s what I yam: I’m Popeye the Sailor Man.” 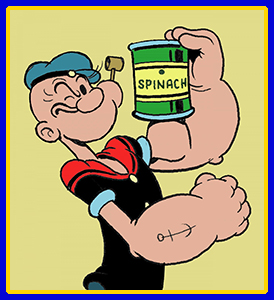 Wikipedia says a nickname is usually substituted for a proper name to express affection, endearment, sometimes amusement, and sometimes to scorn an enemy. For this conversation, a nickname is something more than or beyond an abbreviated given name, such as “Rick” in place of “Richard.” Nicknames often are adopted after a memorable incident. There’s a story behind every nickname.

I apprenticed forty years ago as a pipefitter at Bath Iron Works, builder of the best ships in the world. (I can say that because often ships from other yards were sent to BIW for finishing or refitting, so I saw the quality, or lack thereof, first-hand.) Anyway, like in most other blue-collar industries, many workers acquire nicknames. With a female workforce at BIW of only 8 percent, only a couple others shared my first name. One of them in the welding department was called “Sucker Tube Sally.” A welder, she hauled around lengths of 4-inch-diameter flexible sucker tubes that removed welding smoke from her work in enclosed spaces. Shortly after I arrived, somebody called me “Mustang Sally,” the name of a popular 1966 song by Wilson Pickett. To avoid more grim alternatives, I latched onto that and scratched it onto the front of my hard hat in block letters. 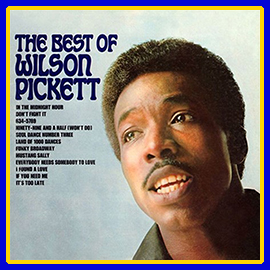 I recently read a book called “The Last Professionals,” a novel about the last of the train hobos who used to ride the rails all around the country. The author, Ed Davis, captures this now-long-gone history and reveals his own experiences from when he rode the rails in the late 1970s – about the code of ethics among the hobos, the exacting precision needed to jump aboard a box car or a flatbed as the engine (“the power unit”) pulled it on its way out of a freight yard, survival tips for food, shelter, and safety, the jargon of the rails, and a kind of caste system that determined each hobo’s hierarchy, including Mafia-like “families” you didn’t mess with. The hobos used names acquired from incidents during their rail-riding lives. The hobos who never left the rails to settle down or do paid work were called “profesh” – professionals. The many nicknames in this book are likely actual ones for the men he rode with – The Duke, Short Arm, Step-Down-Johnny, Trainer Bill, Frisco Lyndy, and Hubbard the Gambler.

My own name – Sally – is not short for Sarah or any other girl’s name. About thirty years ago my mother told me how she picked that name for me. She told me that she had a collie when she was a girl, a beautiful dog that she loved dearly. She named it “Sally.” Thereafter, she always associated the name “Sally” with something beautiful that she loved. I have no problem being named after a dog; in fact, I’m a bit proud of it. Some of my best friends are dogs. 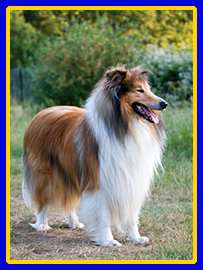 I did inherit some nicknames, though. In letters and emails, my mother usually addressed me as “Datter.” And she often called me “Ladybug” with affection. This endeared me to a neighbor that Phillip and I had when we lived in Virginia. This lady – Southern, black, about 25 years my senior – started calling me that soon after we met. Her birthday was the day before mine, so we also called each other “Twin.” 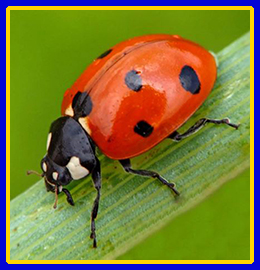 My very first nickname came when I was about six months old.  The family had a reunion and I was brought to the party to be introduced to aunts and uncles and cousins. My arrival on the planet was something of a big deal: the first girl baby after a whole slew of boys born to my parents and these relatives. As I lay in the crib, wriggling and gurgling and probably messing my diaper, my cousin Stevie, about five years old, wandered over to see what all the fuss was about. (Was I hogging attention that he wanted?) He peered into the crib and inspected the stupid baby for a moment. Unimpressed, with a tone of disgust he said, “Well! There’s Madame Queen!” and walked away. 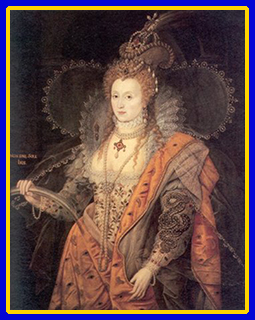 My mother used this moniker on me thereafter, but only when she was a little bit miffed with me. But that never lasted long, and we soon returned to “Ladybug.”

Image: I Am That I Am
https://www.ironrosesister.com/blog/982-knowing-god-i-am