Home Uncategorized ABRAHAM LINCOLN: His Ancestry and The Extinction of His Line

ABRAHAM LINCOLN: His Ancestry and The Extinction of His Line 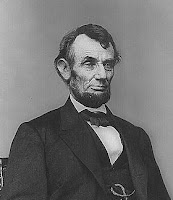 Abraham Lincoln was born 202 years ago on February 12, 1809, in a log cabin in Hardin County, Kentucky, and died in Washington, DC, on April 15, 1865, the victim of an assassin’s bullet.
In his professional portrayal of President Abraham Lincoln, my husband Phillip often is asked if any direct Lincoln descendants live today. The answer is no. The last of the line died in 1985, with no further issue. Only ten generations of Lincolns, of the bloodline of which our 16th president is a part, lived in North America. 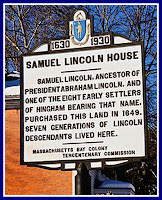 The first of Lincoln’s ancestors to set foot in North America was Samuel Lincoln of Hingham, England, a teenager apprenticed to the weaver Francis Lawes of nearby Norwich, who immigrated in 1637 with family and business to Salem in Massachusetts Bay Colony.  Within weeks, young Samuel was drawn to New Hingham Plantation (Hingham today) where two of his older brothers, Thomas and Daniel, had already settled, having crossed the fierce Western Ocean (as the Atlantic was called) in 1633.
1.  SAMUEL married Martha Lyford, who bore eleven children, of whom four sons and four daughters reached maturity.
2.  The fifth of these children, MORDECAI, born in 1658, trained in Hull as a blacksmith under Abraham Jones, whose daughter Sarah he married.  She bore him two sons, Mordecai (1686) and Abraham (1688), the first Abraham in the Lincoln family, and three daughters.  When Sarah died in the late 1690s, Mordecai married the widow Mary Chapin, who bore two more children.
3.  MORDECAI the younger and Abraham fledged their wings and settled in Freehold, New Jersey, where they established a forge in their father’s tradition.  Mordecai married Hannah, daughter of their landlord.  Hannah bore Mordecai six children, one daughter of which died in 1720 at age three.  Hannah died in 1727; Mordecai soon married Mary Robeson, who added three more sons to the family.  In 1730, Mordecai pulled up stakes and headed into Schuylkill country in Pennsylvania, where his neighbors were the families of the frontiersman Daniel Boone.
4.  Mordecai’s oldest son JOHN married Rebecca (Flowers) Morris in 1743, a widow with one son. She and John had nine more children, five sons and four daughters.  They lived near Lancaster, PA, for about 20 years, until 1768, when John moved the family to the Shenandoah Valley in Virginia, near present-day Harrisonburg.
5.  ABRAHAM, John’s eldest child, born in 1744 while the family still resided in Pennsylvania, was 24 when this move occurred.  He wed Bathsheba Herring in 1770.  His neighbor and friend, Daniel Boone, a frontiersman and explorer, told stories of the Kentucky land beyond the Blue Ridge Mountains. These stories sang a siren song that Abraham could not resist.  He went with Boone in 1781 and purchased land there.  In 1782, he packed Bathsheba, his four children – Mordecai, Josiah, Mary, and Thomas – and his goods through the Cumberland Gap, never to be seen again by the Valley folk. He was soon killed by raiding Indians while clearing his land.
6.  THOMAS, age eight, witnessed his father’s death. After living with various kinfolk, Thomas apprenticed himself in 1800 to a carpenter and cabinetmaker in Elizabethtown, Kentucky.  By all accounts, Thomas became proficient in this trade, producing work of impeccable quality.  By 1806, he had created a small estate for himself and married Nancy Hanks. He and Nancy had three children, Sarah, Abraham, and an infant son who died within a few days of birth. Sarah and Abraham lived into adulthood.
7.  ABRAHAM grew up on the frontier in Kentucky and Indiana. He settled in Illinois once he reached his majority. Despite minimal formal education, he learned how to read, write, and cipher. With these skills, he learned many trades, mastering few, particularly the law. He married Mary Ann Todd, whose family had founded Lexington, Kentucky. Their children numbered four: Robert, Edward, William, and Thomas, of whom only Robert attained adulthood. Abraham moved in and out of politics, serving four terms in the state legislature, one term in the U. S. House of Representatives, failing in his 1858 bid for the U. S. Senate, and succeeding in his 1860 bid for the White House. He presided over the Civil War. As the war ended, shortly after his second inauguration, he was assassinated at Ford’s Theatre in Washington, DC.
8.  ROBERT, a young man at the time of his father’s death, took over as the family’s administrator, attending to his mother’s affairs the best he could in the deep grief and despair that dogged her for the rest of her days.  He married Mary Harlan, and they raised three children in their Chicago home. Robert built a summer home in southern Vermont, which he called Hildene, eventually retiring there. Of his and Mary’s children – Mary, Abraham II (“Jack”), and Jessie Harlan – only Mary and Jessie lived into adulthood and married.
9.1  Robert’s elder daughter MARY married Charles Isham, and they named their single child Lincoln.

9.2  Robert’s younger daughter JESSIE married three times, but had children only in her first marriage to Warren Beckwith. One of the three children was stillborn. The other two were named Mary and Robert.

10.1 LINCOLN ISHAM married, but he and his wife had no children.
10-2.  MARY LINCOLN (“PEGGY”) BECKWITH lived from 1898 until 1975, spending most of her adult years in the Hildene homestead in Vermont. She never married.
10.3 Her brother ROBERT TODD LINCOLN BECKWITH lived in several places around the country, and eventually settled on an estate in tidewater Virginia. He married three times, but none of these unions produced children. Born in 1904, he died in 1985.
Thus the bloodline from President Abraham Lincoln died out 348 years after it had landed in Salem, Massachusetts. Today, many related Lincolns still live in Massachusetts, New Jersey, Pennsylvania, and Virginia, all the descendants of great-greats of grandparents, uncles, aunts, and cousins related to our sixteenth president.
RESOURCES
Tarbell, Ida M.  Abraham Lincoln and His Ancestors.  Lincoln, Nebraska: Bison Books, University of Nebraska Press, 1997.  Originally published in 1924 as In the Footsteps of the Lincolns by Harper & Brothers, New York.