Vice presidents rarely cut any swath, and few people know much about them unless they succeed to the Presidency.  Because Lincoln had a different vice president for his second term (Andrew Johnson who became president on Lincoln’s death), his first VP, Hannibal Hamlin, has been all but forgotten.
Hamlin was only six months younger than Lincoln, born in Paris Hill, Maine, on August 27, 1809.  He began practicing law in 1833 in Hampden, Maine, a little south of Bangor, and married the same year.  Politically, he favored the Jacksonian Democrats.  He served in the Maine State Legislature from 1836 to 1841.  He became a member of the U. S. House of Representatives in 1842, which he held for two terms.  He served in the Maine State Legislature again for about a year, then was elected to the U. S. Senate to fill a vacancy, and won re-election to that office in 1851.  His term in the Senate coincided with Lincoln’s in the U. S. House of Representatives, although they didn’t meet at that time.  Hamlin was elected governor to the State of Maine in 1856, but he resigned to remain in the Senate for another term.
By this time, his strong views on the abolition of slavery and the repeal of the Missouri Compromise led him to withdraw formally from the Democrat Party.  He turned to the new Republican Party, which reflected his political views, and worked to build that party’s platform and support.  After helping to run campaigns in 1860 to nominate Lincoln as the Republican Party’s presidential hopeful, he was chosen as Lincoln’s running mate, and served one term as Vice President.  He left that office in 1865, and enlisted in the U. S. Army as a private for the duration of the war (only a few months). He held various private jobs until 1869, when he again became a U. S. Senator, serving until 1881.  With President Garfield’s appointment, he served as Minister to Spain from 1881 to 1882.  He died on the Fourth of July, 1891, in Bangor, Maine, not quite two months short of his 82nd birthday. (1)   A statue of him stands in the Capitol Building in National Statuary Hall.
This short biography serves to illustrate the life of a man dedicated to public service, with many years of experience in a variety of political positions.  By 1860, Hamlin had achieved national renown as a man of character and integrity, incorruptible, and strongly in favor of the abolition of slavery without being violently radical.
Hamlin’s reputation garnered the nomination for the Vice Presidency.  He was a stronger abolitionist than Lincoln, but was not as radical as some of the Republicans, including William Seward, the party’s leader, whose abolition views were too strong for the palate of most and, in effect, cut him from the race.
Campaign organizers had a field day with Lincoln’s and Hamlin’s names. The two men were obviously meant to be linked together: There was Hamlin, neatly inserted into “AbraHAM LINcoln.” This connection was used on campaign posters and banners across the country. (1)
The Republican convention results – Lincoln for President – did not please everyone in any of the four contending parties.  In July of 1860, the Hon. James L. Orr of South Carolina stated that “Lincoln and Hamlin, the Black Republican nominees, will be elected in November next, and the South will then decide the great question whether they will submit to the domination of Black Republican rule – .” (7) (It’s interesting to note that four months before the elections, one Southern leader was quite sure of its results. Did the South wish to lose the election, to give them an excuse to secede? See my blog post about the secession chip that South Carolina had cultivated on its shoulder since the country’s inception – “The Tariff of Abominations, May 13, 1828”.)

Lincoln and Hamlin never met until December of 1860. Lincoln wrote to Hamlin two days after the election, asking Hamlin to meet him in Chicago.  There, in three days of very cordial meetings, they began the arduous and often delicate task of organizing an administration. (11)  Lincoln was well aware that his Cabinet appointments could sway an entire state toward or away from secession, and he consulted with Hamlin and others extensively.  Knowing he needed a New Englander in the Cabinet, he asked Hamlin to propose a few candidates.  Lincoln was looking specifically for a New Englander to balance the Cabinet, “a man of Democratic antecedents.” (3, 5, 7)  Of three reputable men whom Lincoln was considering – Amos Tuck of New Hampshire, Nathaniel Banks of Massachusetts, and Gideon Welles of Connecticut – Hamlin chose Welles, a Democrat whom Lincoln made his Secretary of the Navy. 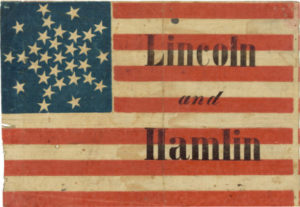 Hamlin’s next move was to push for Negro enlistments.  Later in January, his son Cyrus, an army officer, came to him with a list of eight or ten other officers who wanted to command black regiments.  Hamlin took Cyrus and several of these officers to Lincoln’s office to illustrate to the President that the idea of the military use of Negroes was not universally denigrated among whites.  Lincoln was impressed by the officers’ interest and belief in the ability of black soldiers, and partly as a result of Hamlin’s visit, he finally approved the recruitment of blacks for military service. (11)  When he sent Hamlin to Secretary of War Edwin Stanton to begin organizing recruitment, Stanton (also a staunch abolitionist who had promoted the Union recruitment of black soldiers) literally hugged Hamlin with joy upon learning of the White House’s endorsement. (5)

Hamlin also used his office to some degree to curry favors from the President, primarily in assigning associates to various posts, and in assigning government contracts for military supplies to New England businesses.  Hamlin generally went directly to Lincoln with his requests, including those for military appointments.  As a result, he irritated Stanton no end, through whom Hamlin should have worked.  At Hamlin’s recommendation, Lincoln endorsed putting the Chicopee [Massachusetts] Works into operation to manufacture cannon.  Hamlin also requested that Lincoln appoint a Maine man as consul general of Canada.  (7)
For one who receives little or no mention in most histories of Lincoln’s presidency, whom Stoddard never saw in the White House and whom Noah Brooks (a newspaper correspondent and friend of Lincoln’s) deemed a non-entity, somehow Hamlin’s administrative presence by mid-war was beginning to wear.  The reasons why he was “a jewel” in 1861 no longer applied; the country had changed.  By the time of Lincoln’s Gettysburg Address in November 1863, when the whole Lincoln family came down with a mild form of smallpox called varioloid, it occurred to political movers and shakers that the President could die, although in reality he was far from it.  (The administration had become almost immune to the regular onslaught of assassination threats they received in the mail, and they had for some time stopped considering these letters terribly threatening.)  A general belief somehow grew into an urban myth, that if Lincoln died, Hamlin could not measure up to the task, or perhaps hungered too much for the office. (8)  No one seemed to remember that Hamlin’s political experience was far greater than Lincoln’s.  Stoddard in his journal seems to reflect the attitude of the day when he says: “[Hamlin] would be President if Mr. Lincoln should die, and there is no means by which you can form an opinion of his capacity as dictator.” (9)  (This statement makes one wonder if Stoddard was a Union man; an interesting observation from one who hardly remembered Hamlin’s presence in the White House.)
When the Republican National Convention convened in Baltimore in early June 1864 (4), party leaders had several names to nominate for a new Vice President.  They wanted to present a broader platform, and felt that Hamlin made the ticket favor abolitionism too singularly.  They and others repeatedly asked Lincoln for his preference, if he wanted Hamlin to stay on or if he wanted to work with someone new, but Lincoln consistently demurred, refusing to influence the convention.  If anything was clear, Lincoln wanted the convention to decide for itself. (11)  He believed that the convention should represent the people in their choice.  To this day, no one conclusively knows whom Lincoln preferred, and it may be that he favored each man for different but important qualities that they could bring to the office.  He knew and liked each man.
Andrew Johnson of Tennessee was ultimately nominated, even by Hamlin’s Maine men, for the party felt that Johnson represented strong portions of rebel states which had remained loyal to the Union, eastern Tennessee being one of those regions.  They also believed that Johnson’s Southern roots might do much to mend relations between North and South after the war ended, which was clearly in sight.
Lincoln, a shrewd judge of men, knew of Hamlin’s dissatisfaction with the Vice Presidency, which office Hamlin often referred to as “the fifth wheel of a coach.” (1)  Although Hamlin wanted to remain, he now found himself outside most political circles.  The position was not the pro-active role which he had come to relish as a state legislator, governor, U. S. Congressman, and Senator.  Perhaps if Hamlin had been more up-front about wanting to keep the post, Lincoln might have gone to bat for him.  But Hamlin didn’t, and Lincoln didn’t. But Hamlin was probably torn between the potential of the office and the dismal prospect of four more years of chafing at the bit (unaware, of course, of Lincoln’s coming demise). On March 4, 1865, Vice President Hamlin rode in the carriage on Pennsylvania Avenue to the Capitol and watched, somewhat disgruntled by the situation, as Andrew Johnson was sworn in as the new Vice President.

In an interesting side note that illustrates Hamlin’s personal integrity and staunch support of the Union, Hamlin answered the bugle’s call. Very early on in the war, he had enlisted as a private in Company A of Maine’s Coast Guards, a reserve force. In August 1864, the Coast Guards were mustered to improve their organization should they be called up. Although he could have requested exemption from service because of his position, Hamlin refused, and joined the ranks in Kittery, performing his duties as a rank private with the rest of the boys in blue. He was 56 years old, a graybeard by any military standard, but he didn’t see that as an excuse to shirk his duty. He served several weeks, through the completion of the unit’s military exercises, after which he went on the campaign trail, stumping for Lincoln and Johnson. (13)