I know, I know. You’ve been waiting for this issue of N&N for weeks. Yep, I’m WAY overdue. But I have an excuse. (They are handy to cover one’s butt. Always keep a few in stock for emergencies. When in doubt, call them explanations. The word “excuse” can sound a little whiny, whereas “explanation” sounds like it has credibility.) 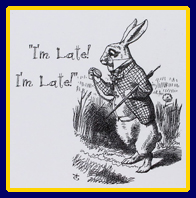 February turned out to be far more overloaded with time-sensitive activities outside of my regular job. First, a friend hired me to do a comprehensive copyedit of a document she needed to submit, with extensive exhibits, for a legal claim against a former employer. (She filed her claim before the deadline. Huzzah!) This was a great project that adds a new element to my professional portfolio.

At the same time, I signed up for an intense, four-week online course in SEO writing, which is about where a website or blog post “positions” when you do a Google search:  Plug in your question and see what links pop up on the first page to answer it. So I learned how to research keywords and how to place them within the text of a website or blog so that it lands on or closer to (“positions”) that first page. That also needed completion by the end of February.

(Come to think of it, SEO writing is all about trying to find out what consumers – readers – are looking for, same as what I nattered about in the last issue. Don’tcha just love it?)

A few late nights resulted in completion of both of these projects, and I’m very happy with the progress of both. But of course they set me back on my other writing obligations, like my writing critique group – preparing both critiques and submissions – and this newsletter, among other things. 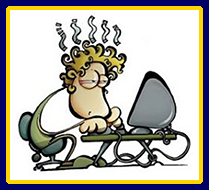 But it’s all good! And spring is coming!

Cohesion in any kind of prose comes from making
clear the relationship of one idea to another:
natural-seeming movement results from integrity
of meaning and the showing of relationships.
These are realized on the page through the structures
of presentation, namely syntax. … Ideas and the words
that carry them do not just accidentally fall
together into a convincing procession. Cohesion that
seems smooth and relaxed is sometimes quite hard
to get and is always a matter, partly, of syntactic choices … 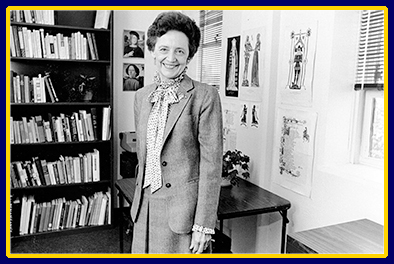 I picked up Tufte’s book second-hand somewhere, and it is a good read for serious writers bent on fine-tuning their skills. Not everyone – indeed, not every writer – has a reason or need to distinguish consciously between past tense and pluperfect progressive tense (don’t ask!). A lot of this sort of thing comes from good education in English usage, which becomes so ingrained that the proper use of the language comes naturally. It becomes like trying to define an indefinite: “I can’t describe it, but I know it when I see it.”

It’s syntax – the study of, patterns of, and rules for the linguistic formation of grammatical sentences – that Tufte highlights in her book. And this statement puts it well, about the sometimes difficult effort to find that ‘sweet spot” in the construction of one’s prose. It can become very technical, but once one is steeped in practice, it mostly becomes second nature.

Here are three sets of homophones. I often see the wrong word used, like when one “peaks through the window” or one “shakes the reigns of the horse.” All three can be used either as nouns or verbs.

Peak, peek, pique
Peak – the pointed top or summit, as of a mountain; the climax of an endeavor
Peek – a quick or sly look; to look furtively, or through a small opening
Pique – a feeling of irritation or resentment; to excite, or to wound one’s pride

Pair, pare, pear
Pair – two objects; to arrange by twos
Pare – to peel, as in the skin of a fruit
Pear – a fruit

I’ve never seen “pear” used improperly, but I do see “pair” and “pare” mistakenly used, one for the other.

Rain, rein, reign
Rain – drops of water from the sky; the action of water falling from the sky
Rein – a strap of harness to control an animal; to use this strap to control it
Reign – the period of a ruler’s dominion; to rule, to exercise that dominion

I’ve never seen “rain” used improperly, but I do see “rein” and “reign” mistakenly used, one for the other. 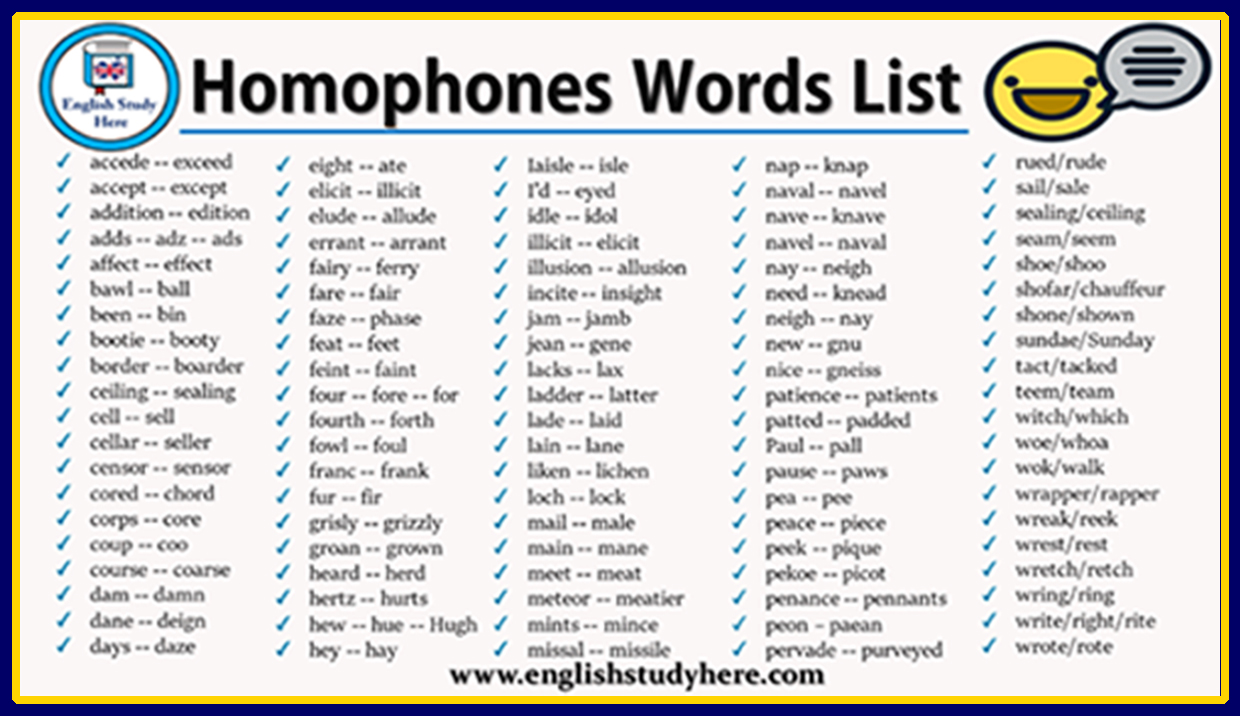 The website English Study Here has quite an extensive list of homophones, although it doesn’t provide definitions that distinguish one word from another. But if you are aware of homophones, they are less likely to show up where they don’t belong.

The children’s poem “Eletelephony” (1932) by Laura Elizabeth Richards is a kind of silly blending of homophone “almosts.” It always reduced me to helpless giggles, well into adulthood. Perhaps it invoked in me a helpful awareness of homophones (or perhaps not). But it is too much fun not to include here. Does it reduce you to giggles, too?

Once there was an elephant,

The Book of Books: 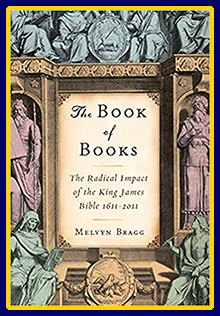 This is another second-hand find that will remain in my library. You don’t have to be a Christian to enjoy this book. It is a detailed history and analysis of the influence that the King James Bible has had on all aspects of the Western world since its creation and publication in 1611. It has had an indelible impact on literature and literacy, sacred and secular criticism and interpretation, the arts, commerce and industry, slavery and racism, war and peace, sex, women and feminism, social movements and politics – you name it, Bragg addresses it.

The idea of translating the original documents from Hebrew, Greek, Latin, and other languages into English was vehemently opposed. Only ignorant commoners in England spoke English, at that time a bastardized blend of Anglo-Saxon and Norse. Royalty and nobility spoke French and other European languages; they couldn’t understand English, much less speak it. Needless to say, King James I wasn’t popular for demanding that this translation be effected. But he was king; he wasn’t vying to place as top dog in a popularity contest. His word was law.

To make available to the unwashed masses the Bible in a language they understood, including conducting church services in English instead of Latin, risked opening the doors of literacy to the people. It challenged the authority of the church, from the pope down to the parishes. And that risk proved very real. The English-language Bible gave power to the people, whether they were believers, agnostics, or atheists.

Oxford English Dictionary
syntax         French, late Latin, Greek; dating from 1577
n. orderly or systematic arrangement of parts or elements
n. the arrangement of words (in their appropriate forms) by which their connexion
[sic] and relation in a sentence are shown

Merriam-Webster.com
syntax         Middle French or Late Latin; dating from 1548
n. the way in which linguistic elements (such as words) are put together to form
constituents (such as phrases or sentences)
n. a connected or orderly system : harmonious arrangement of parts or elements

Not to be confused with another homophone: sin tax (placed on gambling, alcohol, tobacco, and other goods and services deemed morally, physically, or socially harmful)

To Tickle Your Funnybone

Duffy:
Bill Brayton and his wife, Erica Wurtz, are going to make an urn for Mother’s ashes. He would like to know what style and size we would like and whether or not it will be buried. Here is a link to Erica’s work.  [link shows a variety of modern, heavy stoneware vases]

Ben:
I think we had planned to bury it in the Madbury cemetery. I have no preference as to style or size, and I don’t Mother will care either.

Sally:
I’m of similar mind as Ben, but were I to choose, I’d perhaps opt for a green one, since Mother wore that color so well. I do like the twisted ones over the others.

Duffy:
They can make a more traditional one.  Bill made me a bean pot once…that would be a bit large.

Sally:
Maybe if he designed it for small beans …

Duffy:
She might have liked being put in a bean pot … or a pressure cooker?

[Mother was an avid devotee of pressure cookers, using hers at least once a week. There were five of different sizes in the shed attic, besides the one in the house.]

Sally:
Oh! I’m voting for the pressure cooker! (except I think you’ve got rid of them all) 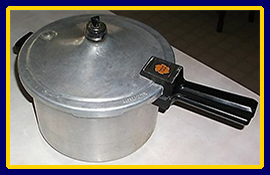