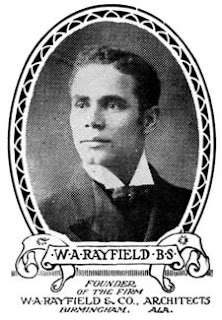 This day, February 28, marks the 70th anniversary (1941) of the death of Wallace Augustus Rayfield, an Alabama architect of local reknown, although now mostly forgotten. He is the first black architect in Alabama to practice professionally, and the second black architect in the United States to practice professionally.
Not much is known of Rayfield, but more is being discovered as researchers trace his records. Most resources (but not all) list his birth year as 1874. All sites agree that he was born on May 10th in Bibb County near Macon, Georgia.  His father worked as a porter for the railroads. Some accounts have it that his mother had attended Atlanta University; others claim she was a maid.
His mother died when Rayfield was twelve, and he went to Washington, DC, to live with an aunt. He graduated with a B.S. from Howard University in 1896. He worked for A. B. Mullett & Company, an architectural firm in Washington, for two years before moving to Brooklyn, NY, where he attended Pratt Institute for formal architectural training. After graduating from Pratt in 1898, he went on to Columbia University, where he received a Bachelor of Architecture degree the next year.
It was during this year at Columbia that Rayfield met Booker T. Washington, who offered him a position at the Tuskegee Institute. Rayfield spent the next eight years there, teaching mechanical and architectural drawing. From there, he went to Birmingham, Alabama, where he established his professional office, the first black-owned architectural firm in Alabama. He soon began collaborating with a black contractor, Thomas C. Windham, and these two men produced many buildings in Birmingham for a growing black clientele. Besides residences, banks, offices, private clubs, schools, institutional buildings, and hotels, Rayfield designed many local churches, including the Sixteenth Street Baptist Church, tragically launched into the national spotlight when the bombs placed by white supremacists during the Civil Rights movement killed four girls in Sunday school on September 15, 1963.
He designed more than 400 buildings across 20 states, 130 of them in Birmingham. Besides architecture, Rayfield was noted in his day for his talent in the printing industry, which supplemented and broadened his architecture practice. He designed newsletters, brochures, plan books, and advertisements.  He even developed his plan books for the designs of different buildings to appeal to different clientele – color, religious denomination, field of industry, and so forth.
He died of a stroke on this day in 1941 in Birmingham.
He is not well remembered today for several reasons.  He was black, and therefore given little attention in his day by a profession almost exclusively white. (Even today, blacks make up only about 1.5 percent of the architects in the United States.)  His practice collapsed during the Great Depression; in Birmingham, the unemployment rate was twice the national average. And besides these factors, who ever remembers the architect of almost any building or structure, famous or otherwise? 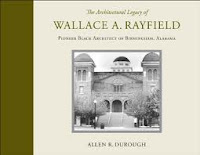 In 1993, Allen R. Durrough of Bessemer, AL, a white Southern Baptist preacher, discovered a collection of hundreds of Rayfield’s printing plates in a decrepit barn that he was cleaning out before demolition. He has made it his mission to discover who Rayfield was, and to bring his accomplishments to light. His efforts have renewed interest in this obscure architect, and he has recently published a book about Rayfield and his work (see resource below).
This African American, who figured significantly in the development of the South’s urban landscapes, is no longer hidden or lost. Many of his buildings still stand – at least four are listed on the National Register of Historic Places – for all to appreciate.
SOURCES:
BookRags.com http://www.bookrags.com/tandf/wallace-augustus-rayfield-tf/
Ward, Logan. “The Remarkable Mr. Rayfield,” Preservation Magazine, Jan-Feb 2011.
Durrough, Allen R. The Architectural Legacy of Wallace A. Rayfield, University of Alabama Press, 2010.