Some of My “Hunh?” Moments

Andy Rooney used to have a segment on a weekly news commentary show on television, which he called “Did You Ever Wonder?” I never watched the show, but he did gain widespread recognition for his segments, because they did make people scratch their heads. Here are some of my Rooney-style “hunh?” moments, mostly from advertisements.

Memory Care Facilities: These days, advertisements abound for “memory care” facilities, where seniors with failing mental faculties can be cared for in safety. The terminology has become very popular, indeed, anchored thoroughly in our cultural lexicon, and it’s a valuable service.

My off-beat mind, however, finds the euphemism ridiculous. Whether or not you suffer from mental decline, no one can take care of your memory.

I imagine an elderly man in the memory bank lobby, handing a package labeled “Memory: John Doe” over the counter to the teller: “Please put this in my safe deposit box for me.” 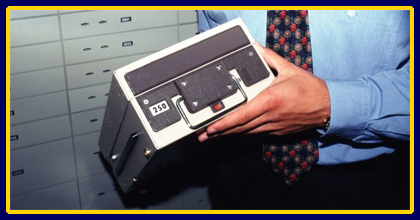 I recently received an email ad with the headline: “Do You Have Memory Loss?” My immediate thought was: “How would I know?”

“… up to XX percent or more!” Here’s a contradiction: “Up to” dictates the maximum possible or allowed. It can’t go above that limit. If it goes above that (“or more”), it’s no longer “up to.”

Vinyl Siding: With a miniscule number of exceptions, business owners should never do their own commercials. In a television ad for house siding from thirty years ago, the business owner – neatly attired with a dress shirt and tie, his one-size-too-small jacket straining its buttons – proclaimed with heartfelt sincerity that, “We will put your house on vinyl siding.”

This is just a sampling from the wacky things I’ve collected. I’ll amuse you with more another day!

Night fell again. There was war to the south,
but our sector was quiet. The battle was over.
Our casualties were some thirteen thousand killed –
thirteen thousand minds, memories, loves,
sensations, worlds, universes
– because the human mind is more
a universe than the universe itself –
and all for a few hundred yards of useless mud. 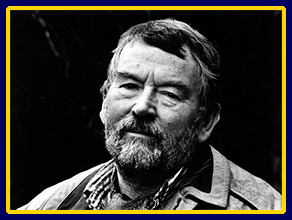 This quotation comes from John Fowles’ novel The Magus (1965) about Nicholas Urfe, a young Oxford graduate, who takes a teaching job on a Greek island, where he meets Maurice Conchis, a wealthy Greek recluse who collaborated with the Nazis during World War II. Conchis engages him in mind games from which Urfe cannot extract himself, becoming Conchis’s puppet.

In the advent of Memorial Day, it seems appropriate to consider what this quotation (probably by Conchis) is telling us – to be mindful of the price we place on “a few hundred yards of useless mud.”

Do the ends justify the means?

I find particularly moving the idea that “the human mind is more a universe than the universe itself.” What an astonishing illustration of our individual potential! How puny we think ourselves to be, when we waste our lives obsessing over our superficial differences.

We are designed to be more noble. Let us uplift each other to do so.

[This piece appeared on my old Blogger page ten years ago. It seems timely to resurrect it now. – SMC]

On holidays like Memorial Day, the Fourth of July, and Veterans’ Day, too often we give lip service only to what these days represent. It’s easy to forget the sacrifices of those service men and women who have committed themselves to protect and defend our privileges, our rights, and our freedoms, even at the cost of their lives, while we enjoy a family cookout or a day at the beach.

Every now and then, something jolts us out of our bland (and sometimes blind) acceptance of the status quo, and makes us think more deeply on the meanings of these holidays. As we recognize Memorial Day this week, I am mindful of one such epiphany.

In 1999, my husband Phillip, who gives a professional, first-person portrayal of President Abraham Lincoln, was asked to participate in the re-dedication of a Civil War monument in Glens Falls, NY. The monument (made from a Canadian sandstone – an unfortunate selection for this environment) had suffered deterioration from acid rain and wind erosion since 1868 when it was erected. Now it had been restored and stabilized. A new bronze plaque had been fixed to it, naming thirteen more of the town’s soldiers not in the original roster. 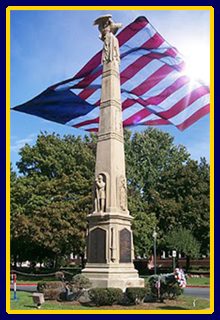 The re-dedication ceremony was part of a weekend of historical activities. It featured a Civil War era brass band, a color guard, a host of Civil War reenactors, and speeches by local and regional leaders and historians, culminating with the unveiling of the renewed monument and a detailed explanation of its improvements. The National Guard fired thirteen rounds from two modern howitzers to honor the soldiers whose names were added to the monument.

Phillip and I have been active reenactors since the Bicentennial, in both American Revolution and Civil War living history events.  As a result, we are perhaps more aware than the general public of the reasons, principles, or commitments of the civilian soldiers or volunteer soldiers of those days. But no matter how we may strive to reproduce even a semblance of the lives of those we portray, most of us have not “seen the elephant,” in the parlance of the Civil War. We have not “been there, done that.” The awful realities of war remain comfortably, distantly academic to us civilians.

As a reenactor, I have become accustomed to gunfire, and rarely even blink. I have experience on a cannon crew. The howitzers, however, placed at the far end of a parking lot and pointed away from the gathering, were louder than anything even a reenactor hears. The report of these modern guns – even firing blanks – is much sharper and louder than that of 18th or 19th Century artillery. When these guns spoke, everyone jumped. Many in the audience yelped in surprise, laughing nervously afterward, and frightened toddlers wailed. The concussion set off nearby car alarms.

As I sat on the dais, my back to the howitzers, I was surprised at how intensely the sound of these big guns affected the audience. As I thought of it, I realized that these people were startled because they so rarely hear such things, if at all. We Americans do not, as a rule, hear gunfire often; most of us have never heard the thunder of artillery in person. 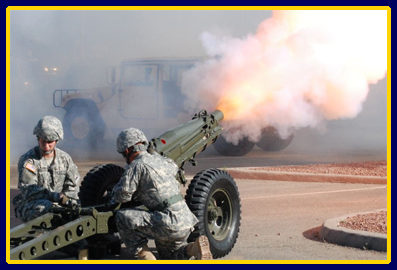 What a privilege that we do not! What a tribute to the work of our military over the past 200-plus years – and today – protecting us! What peace of place and of mind they provide us! It never occurs to us to think about how our daily routines are uninterrupted, ungoverned by the drone of bombers overhead delivering their payload, by the rattle of machine guns tearing ribbons of holes into everything. Despite a smattering of daily disorder and minor disasters, our lives are, for the most part, organized and civilized. On most days, most of us rise, go to work or school, engage in domestic, social, or civic functions in the evening, turn out the lights with our families around us, intact, and sleep undisturbed. We plan our futures.

That the sound of military might is alien to our ears is a luxury. How many millions elsewhere in the world do not enjoy this kind of peace? In Libya? In Israel or Syria? In Central Asia? In Yemen or Serbia? In Korea or Viet Nam? How many have become deaf to the chronic battle around them every day, blind to the damage to every neighborhood, dumb to the expression of horror at the unrelenting destruction – because to acknowledge it every moment would lead to insanity? How many have never known anything else?

On this Memorial Day, let us take a few moments to reflect on the miracle that is the United States of America. Think on this: How many other nations have a military force governed and guided by principles within a constitution like ours, a remarkable document unlike anything in the world before or since? How many other nations have achieved such an equilibrium? We’ll always have our warts, but our pearls far outnumber them.

I hope you will remember the sacrifices of those who have willingly put themselves in harm’s way – and who continue to do so – often giving that last full measure of devotion, in order that we civilians can engage in simple, social, domestic, and cultural activities like parades and cookouts, unassailed by a cacophony of angry artillery, a rain of fire, an endless chaos of violence. 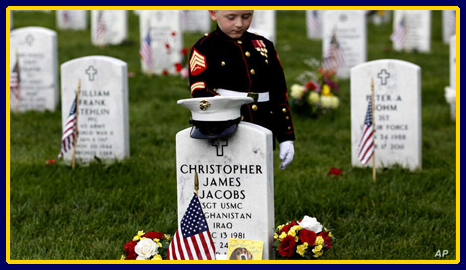 My sincere and heartfelt thanks (woefully inadequate) go to all who serve and have served, for my benefit. God bless our service men and women, wherever they are. God bless the United States of America. 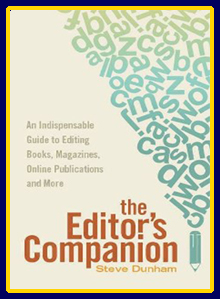 Steve Dunham is a longtime writer and editor who lives in Virginia. He studied journalism in college, which led him into full-time non-fiction work – both writing and editing of newsletters, articles, journals, public-service announcements, press releases, corporate reports, newspaper columns – sprinkled with humor writing. (His sense of humor is evident in this book.)

“The Editor’s Companion is a friendly, helpful guide to the principles of editing,” Dunham says. “I hope it will be useful to journalism students, novice editors, and those who have editing thrust upon them … as well as lone editors in an alligator pond of co-workers and bosses who have their own ideas about how to punctuate and capitalize things.”

I picked up this book at a Savers second-hand store last month, and I’m glad I did. It confirmed and reinforced my (apparently accurate) recollection of elementary school guidelines for English grammar and usage; it reminded me of some of that grade-schooling that I didn’t remember; and it enlightened me about aspects of writing and editing I haven’t thought of before.

This book is a useful tool for anyone responsible for arranging on paper more than two words at a time. Besides that, it’s an entertaining read. Dunham is humorous but not snarky. He recognizes that no matter how good a writer or editor one is, mistakes will happen or slip by unnoticed. He even posts some samples of his own gaffes.

Oxford English Dictionary
soldier
noun form: dating from c. 1300
verb form: dating from 1647
origin: Old French variants soudiour, souldiour, souldeour
1. n. one who serves in an army for pay, takes part in military service or warfare
2. n. one with military skill or experience
3. n. [many zoological and botanical definitions]
4. v. to serve as a soldier
5. v. to drill or train
6. v. to bully or hector
7. v. to feign illness or to malinger; to shirk from work

Merriam-Webster.com
soldier
noun form: dating from the 14th century
verb form: dating from 1647
origin: Middle English soudeour; from Anglo-French soudeer (mercenary);
from soudee: shilling’s worth, wage; from sou or soud: shilling;
from Late Latin solidus
1. n. one engaged in military service, especially in an army
2. n. an enlisted man or woman
3. n. a skilled warrior
4. n. a wingless sterile termite or ant with oversized head and jaws
5. n. one who shirks work
6. v. to serve as a soldier
7. v. to push doggedly forward – “to soldier on”
8. v. to make a pretense of working, while really loafing

Not much on the horizon yet, but a few in-person events are loading the calendars. I’ll be displaying my books at these two.