Skip to content
Home Uncategorized Only As Smart As Your Sources?

Only As Smart As Your Sources?

Only As Smart As Your Sources?

“You’re only as smart as your sources.”

The message is obvious: “We are your best news source, so tune in to us.” But day after day, the slogan kept poking at me, and I realized that an entirely different message runs within it. Intentional? I don’t know.

If I’m only as smart as my sources, that implies (not very subtly) that I’m incapable of thinking or reasoning. What if my sources aren’t as smart as I am (however smart I may or may not be)? Am I then reduced to their level? How does collecting factoids change one’s intelligence?

Something of an insult, don’t you think?

And what is the definition of “sources,” here? If Michelangelo were only as smart as his sources, the stone block delivered to him would still be nothing more than a rough-hewn chunk of marble, not his magnificent, sculpted David. What was his source? His patron who purchased the stone? The quarryman who cut the block from the quarry? The quarry? The block of marble itself? 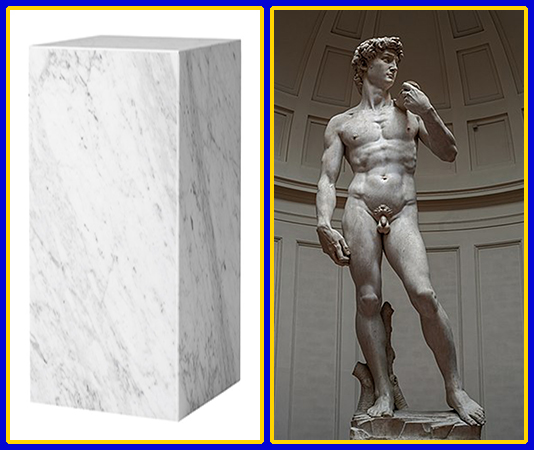 If we are only as smart as our sources, then nothing in the world would ever have been invented or developed. No caveman could have formed the idea that if he tied a stick – to make a handle – to the stone he used for pounding, he could wield more power with less effort.

We would have no Mona Lisa, no yardsticks, no Pythagorean theorem, no Golden Gate Bridge, no Buddhism, no Monopoly game, no Brittany spaniels, no Library of Congress, no Spanish language, no Route 66, no Bury My Heart at Wounded Knee, no Oxford University, no hot-air balloons, no Wimbledon tennis tournament, no Great Pyramid, no dairy farms, no aspirin, no Star Wars, no bicycles, no Beethoven’s 5th Symphony, no hacksaws, no 4th of July parades, no textile mills, no French cuisine, no Sherman tanks, no Socrates, no steam engines.

No ideas at all!

Thoughts, ideas, and questions bounce off each other to generate a “What if?” They collaborate to create something greater than their mere sum. That “What if?” question has produced everything we have, through innovation and invention.

The power of words and their arrangements: Think about that – because you can!

It is the long history of humankind (and animal kind, too)
that those who learned to collaborate and improvise
most effectively have prevailed.

Darwin’s understanding of collaboration ties in with our ability to think, ponder ideas, and apply learning. I find it intriguing, not just between humans (like the Red Sox winning the World Series) or between animals (like the wolves in a pack using a relay system to hunt an elk), but also between humans and animals.

As humans, we work with each other toward a greater good. But what about humans working with other species of animals? Some instances we take for granted, because in our limited experience,they’ve always been there. But maybe they’re worth a second look, if for no other reason than to appreciate one more wonder of the world. 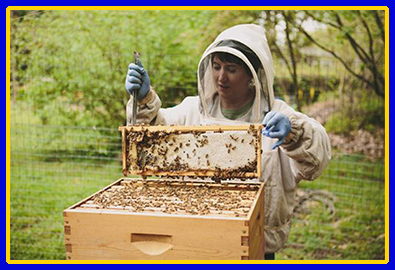 Bees and their keepers have an intimate relationship. Honey bees show remarkable abilities to communicate with their keepers. My brother Bill kept bees for several years, and was constantly astonished at how they accepted and encouraged his stewardship. Here are a few tales of his adventures with his millions of “ladies.”

Early in his experience, one of his colonies outgrew its hive. A squadron of bees set out to tell him. First, they landed on his boots while he was working outside. When he didn’t respond, they flew up and landed on his beard. When he still ignored them, they began to march up his nostrils. That got his attention, and he realized they wanted something. When he headed toward the hives, the squadron lifted from him and led him to the needy one. He removed the top and peered in. Sure enough, it was overpopulated. He provided them with a new hive, and a contingent immediately moved in.

Another time, the bees warned him of an oncoming summer storm. Bill secured the hives, but he didn’t yet know to install the storm door for the duration of the bad weather. This is a disc the size of the entrance, with a small hole in it to allow only one bee at a time to pass through. After the storm, he found that at each hive many bees had created a door with their bodies, locking their legs together, sacrificing their lives to protect the hive. Thereafter, he installed the door when storms threatened, no matter the season.

Sometimes he rented his bees to farmers to pollinate their fields. He’d put the hives into his station wagon and cover them with netting. Invariably, a bee would escape the netting and buzz curiously around the inside of the car. Bill always brought a spray bottle full of sugar-water, and sprayed the wayward bee until the sugar-water weighed her down too much to fly. She’d spend the rest of the trip happily licking the sugar from herself.

Bill only rarely received stings, even if he angered the bees. Early one morning, he slipped on the dew-wet grass when re-locating a hive, and dropped it. Bees swarmed out furiously, but they did not sting him. They flew hard at him and pinged him, ramming their heads into his face.

Another cross-species collaboration is that between humans and canines, which dates back to caveman days. The social structures of dogs and humans are quite similar, which explains how well the two species have evolved their partnership. Dogs form packs, and in these days of the domestic pet, a dog’s pack is its human family. You may notice that more often than not, humans cater to their pet dog. (Who’s the pack leader here?)

The dog provides protection, entertainment, and affection in exchange for food, shelter, and the security of a pack.

Partnership is even stronger with working dogs. Seeing Eye dogs come to mind first. Police dogs, teamed with human partners, are now officers of the law. Their military cousins are given actual rank. Sheepdogs are wired to work, and they’re bred to know their business.

At sheepdog trials, a shepherd and his dog compete with others to drive a small flock of sheep into a pen in the shortest time. The shepherd whistles to instruct the dog. The dog moves independently, watching the shepherd’s hand signals and listening for his calls. Like a dance, the dog dashes now, then crouches, then creeps low to the ground; then darts left or right to flank a sheep that tries to break away, stares down an unruly sheep, sometimes snapping, sometimes growling.

Another inter-species collaboration known to very few people has been that between killer whales (orcas) and men.

In the book Vanished Fleets: Ships and Men of Old Van Dieman’s Land, Now Tasmania by Alan A. J. Villiers (1931), Villiers (a Tasmanian) recounts mid-19th Century instances of this rare partnership, gleaned from old-timers who had experienced it.

Long before Europeans settled Tasmania, baleen whales fed in the River Derwent, a broad salt-water bay. Orcas would often trap them there and kill them to eat. In the 1830s when settlers established Hobart Town (now Tasmania’s capital) in the upper reaches of the river, the baleen whales were so plentiful that men harpooned them from the shore, using block and tackle to haul them ashore for processing. The orcas would linger offshore, waiting for the men to heave the whale livers back into the water. Before long, the orcas learned to herd the baleen whales into the bay for the men, and were rewarded with livers.

A more recent book, Of Orcas and Men: What Killer Whales Can Teach Us by David Neiwert (2015) tells the same story in greater depth. Neiwert reports:

“[Starting in the 1840s] the orcas would drive the whales [right whales and humpback whales] into the [Kiah River’s] mouth, alerting the [Davidson family] to the presence of prey by extraordinary displays of tail-lopping, and wait for the humans to harpoon and kill them. Then the Davidsons simply tied a rope and buoy around the whale’s flukes and left the first spoils to their cetacean partners, who would feed on the carcass for a couple of days, mostly taking just the lips and tongue [which they preferred]. The whalers then would row out and bring the remains in to shore for rendering. They called this arrangement ‘the Law of the Tongue.’

“This went on for 90 years. Over time, the Davidsons and the orcas developed a special kinship. If orcas became entangled in the whalers’ ropes, the humans would abandon whatever efforts they were engaged in to rescue their partners. These were also shark-infested waters, and occasionally the big baleen whales would smash the little green row-boats and send their occupants spilling into the sea. When this happened, the orcas would surround the men in the water and protect them from sharks until they could be rescued.

“The orcas were selective. Other whaling operations would periodically show up … to partake of the bounty there, and the orcas would simply ignore them. When it came to the Davidsons’ trademark green boats, however, the orcas were so helpful that they would even grab ropes in their mouths and assist with the hauling.” 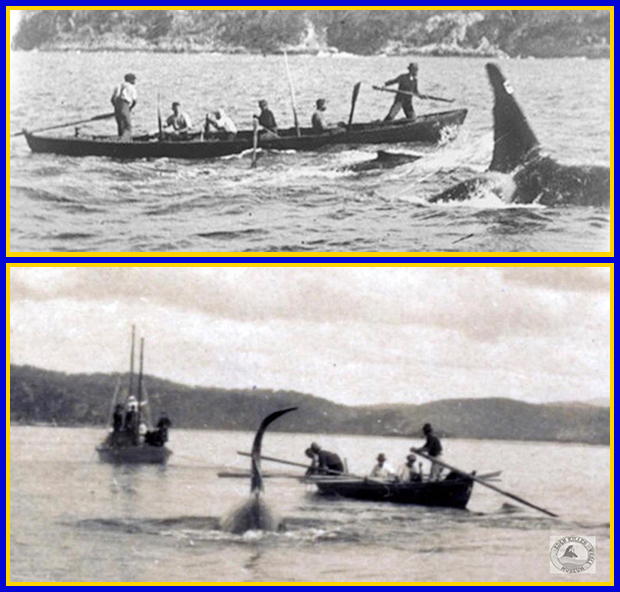 “Old Tom”, photographed in the late 1920s, working with the Davidson family whalers

The Davidsons gave names to the members of this pod of orcas, like Hooky, Humpy, Cooper, Big Ben, and Big Jack. The most famous (shown with the tall fin in the 1920s photos above) was Old Tom, whose skeleton was hung up in the local museum after he died in 1930. It hangs there still. 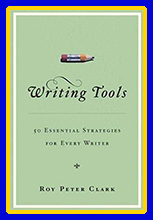 Countless books, current and out of print, talk about the art and craft of writing. This one by Roy Peter Clark is quite a bit different from others I’ve read. It focuses on mindset more than on technique.

He debunks the myth that writers are an elite group with grand vision to which only they are privy. Nope. We writers are grunts just like everyone else. We happen to hone our aptitude, just as non-writers hone their aptitudes in whatever speaks to their hearts.

Clark refers to these strategies as tools, not rules. Rules live in the realm of English usage standards – parts of a sentence, use of punctuation, that sort of thing. On the other hand, these tools are to be used as needed with the degree of finesse that suits the creative work. Using them shapes the writer’s style and voice, neither of which can be pigeon-holed into a rule category.

Clark not only shows the reader how a writing concept (tool) is used, but also why, which clarifies one’s understanding. Sometimes he shows why it doesn’t work.

It’s a fun read. He is witty and conversational, and he encourages us to play with language. If you have qualms about your writing skill, this book will help you build a friendship with the written word.

I will be performing on Saturday with my corps
The Musick of Prescott’s Battalion.