Skip to content
Home Uncategorized Too Much Noodling, Not Enough Nattering

Too Much Noodling, Not Enough Nattering

Tuesday, August 24, 2021
Too Much Noodling, Not Enough Nattering

OK, I’ve noodled around with this newsletter long enough. And not enough, or it would have been out weeks ago. Its main topic is snails, but the ideas have been moving at less than a snail’s pace in my beady little brain.

The colloquial saying, “The aheader I goes, the behinder I gets,” is an apt description of life’s distractions lately. This quotation has been attributed to Lewis Carroll in Alice in Wonderland, but he didn’t coin it, nor did his White Rabbit or Alice. The Pennsylvania Dutch have a similar saying, and some versions date back only to the mid-20th Century. Whatever its origin, you know what I mean by it. No doubt you’ve been there, too, more than once.

So maybe a bit of catch-up is in order, so I can get this out the door and into the inboxes of my adoring fans. A number of you have wondered if I fell off the edge of the earth. Maybe I did, but I’m digging in with my fingernails, scrabbling back onto level ground.

Remember that world-dominating, bare-root rambling rose bush I mentioned in May, the one that sat in the side yard, during our front steps replacement, the one that I believed would hardly notice being unearthed? I poked it back into the ground a week later. Then I spent two months inspecting it every few days, to see if it would come back. Yep, two months: nothing happened. Perhaps I had killed it. 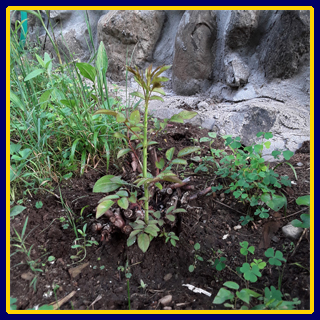 Then, around the Fourth of July, I spotted a tiny shoot less than an inch high, tucked between its old stumps. I hadn’t killed it! With rain every day in July, the thing grew eight inches in the next four days. (That’s it, above.) Now it’s four feet long, and I need to train it to a stake so it will grow up, not sideways. And some sibling sprouts have joined it. 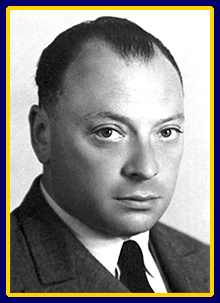 It is evident from the tardiness of this newsletter that I am not suffering from premature publishing. Maybe from thinking slowly, though.

On to the snails. We think of them as slow creatures, and from our perspective, they are. But what about their perspectives? Do they have racers and plodders? High-achievers and dead-beats?

My poet friend Doug, out in Ohio, posted to me recently that “A snail does not know where it is going. That would assume it has been there before.” This may be true for some snails. I propose, however, that it is not true for all snails. Here is testimony about at least one snail that knew exactly where it was going.

Faster than a speeding sand dollar
Perhaps forty years ago, I was at my family’s summer place in mid-coast Maine, on Muscongus Island, which lies about a mile offshore. I went down to the shore to check out the low tide. It was a so-called spring tide, which has the highest and lowest tides of the month, coordinating with the full moon. In late summer, the spring tides reach extremes higher and lower than usual.

I crossed the mud flats to the less muddy flats of Sand Cove. Sandy beaches of mid-coast Maine are few and far between, but this one is truly sandy, although at the margins of the low water mark, it mixes with a thin mud slurry.

This beach is home to quahogs (“hen clams”), razor clams, and sand dollars. The clams of both families squirted their displeasure at their siphon holes having been uncovered by the tide. And the sand dollars were even more upset at their exposure to the air. This was a rare and scary event.

A sand dollar’s shell is covered with a fine carpet of infinitesimal spines. The creature moves these spines in a pattern not unlike that of a centipede’s legs. (T 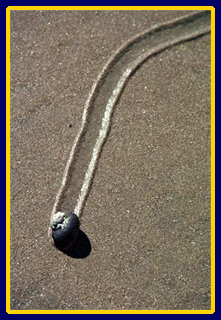 hink about the nervous system coordination of that!) But because those spines are so tiny, “swift” is not part of its vocabulary. (Here is a video of a sand dollar burying itself in the sand, which takes three-and-a-half minutes. You can see the spines’ movement.)

Racing snails
The fantasy land in “The Never-Ending Story” is inhabited by a great number of creatures, some of which resemble familiar animals – like horses, bats, turtles – but which have anything but familiar characteristics. Gluckuk (a Tiny Man of the Winzlings) rides a racing snail. The snail looks sleepy and amiable, and is easily distracted by munchable flora, but when it’s time to travel, it moves like lightning, and all you see is the cloud of dust in its wake. 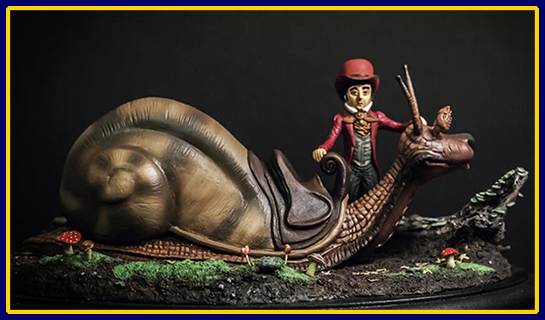 Racing snails have perennial appeal. Other movies feature racing snails, like “Turbo” (2013); video games (including “Dungeons and Dragons”); and a line of superhero toy figures called “Snailiens,” which are “supersonic shell fighters” along the lines of the Teenage Mutant Ninja Turtles. In the real world, competitions with live snails are held in the UK. (Other snail figures in the history, entertainment, fiction, and fantasy worlds abound, but at much slower speeds.)

Fighting snails
Equally popular, at least 800 years ago, were fighting snails. Scribes preparing manuscripts laced these documents with beautiful margins painted in vivid colors. They created whole worlds of picture stories around the texts. These are called marginalia. (In the image below, taken from one of these 14th Century manuscripts, note the figures at the very top – a naked man thrusting a spear at a snail.) 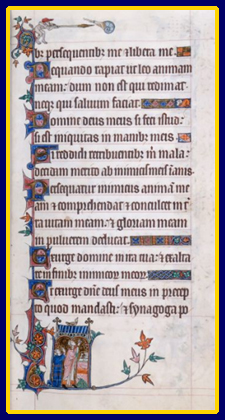 No one knows why the scribes doodled thusly. Many doodles depict the most strange, fantastical creatures, called “grotesques” – hybrids of animals, like a two-legged monster with a boar’s head, or a wolf-lion with a wooly-mammoth hind end. A rabbit plays a pipe organ while a monkey pumps the bellows. On one page, the back half of a fox disappears into its hole; on the next page its front half emerges from the hole. Sexually and scatologically explicit pictures. Themes from the Bible, from Greek and Roman mythology, from the great philosophers. All manner of animals.

The purpose of this bizarre doodling is unknown, and the meaning of the fighting snails versus knights is even more obscure. There are many instances of snails going up against knights in armor (sometimes the knights are rabbits or monkeys), and at least one instance of a snail wielding a sword against a knight, both of whom are riding rabbits. Sometimes the knights are shown on their knees before the snails, praying for mercy. Sometimes the snails are large, sometimes small. The snails’ over-sized antennae flail like bludgeons at the knights.

Some scholars of this artistic graffiti have posited that the snails represent a powerful political party in disfavor during the first half of the 14th Century, when most of this doodling took place.

You and I would have had our knuckles rapped for drawing in the margins of a book, but considering the sheer volume of medieval doodles, the authorities must not have considered them a problem. Maybe they liked and endorsed them. Maybe they commissioned them.

Times do change, whether or not we are on snail-time. 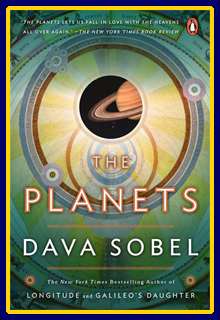 The Planets (2006)
Dava Sobel
http://www.davasobel.com/
A delightful little book has crossed my path since I last wrote:  Dava Sobel’s The Planets. It is a curiously wonderful treatment of science and history in quite lyrical prose. Each chapter addresses one of the planets in our solar system. I’ll bet you didn’t know that a number of our planets aren’t even solids (I didn’t know), but are made up of liquids or gases of various elements and chemicals. Sobel includes the social history of Pluto, too, that most remote of planets about which astronomers can’t make up their minds whether or not it qualifies as a planet. I’ve felt kind of bad for poor Pluto since 2006, fifteen years ago to this very day, when it was demoted to the status of “dwarf planet.”

Wikipedia’s description of Sobel names her as “an American writer of popular expositions of scientific topics.” Among many other writing gigs, she has been a science writer for the Cornell University News Bureau, covering everything from astronomy to veterinarian medicine, and staff reporter in the Science News department of The New York Times, covering psychology and psychiatry.

She has published a number of non-fiction books besides The Planets, including Longitude, about the 18th Century English clockmaker who invented the device for sailors to determine their longitude when crossing oceans; The Glass Universe, about the female assistants to the resident astronomers at the Harvard College Observatory; Galileo’s Daughter, in which Galileo’s daughter Celeste, a nun in a convent, is allowed to communicate with her father only by letter; A More Perfect Heaven, about how Copernicus revolutionized our perception of the cosmos; and several other publications. I’ve now read three of these works and enjoyed them all thoroughly.

Saturday, September 11, 2021
Wakefield Farmers Market
9:00 am – 1:00 pm
Hall Park, 468 North Avenue, Wakefield, MA
I’ve registered to exhibit and sell books here four times this season; two have come and gone. I’ll be there again on September 11 and October 9. Come on by and say hello, check out my books and others by writer friends. While you’re there, pick up fresh produce, local preserves and pastries, artisan wines, and arts & craft products while you’re visiting.

Image: typ. page from British Library MS 49622 “The Gorleston Psalter”
Notice at the top the doodle of a naked man wielding a spear at a snail
http://www.bl.uk/manuscripts/Viewer.aspx?ref=add_ms_49622_fs001r